The Odessa Fire Department entered the Emergency Ambulance business at high noon Tuesday, July 24th 1973 and firefighters who have volunteered to man the service were standing by at three fire stations. Approval of the city's undertaking the responsibility came a little more than two hours earlier on a unanimous vote by the city council. Deputy Chief E. W. Parker said ambulance vehicles complete with drivers and attendants, were ready to go at the Central Fire Station and at Station # 5 at 38th & Dixie. A reserve unit which could be pressed into immediate service if needed, was standing by at Station # 6 at Brentwood & Grandview, Parker Said.
The City will make a charge of $25.00 per person per call, and the only destination the city vehicles may make will be to the emergency room at the County-owned Medical Center Hospital. Deputy Chief Parker advised residents needing the emergency ambulance service to dial 911, which is the established emergency telephone number here. "They can also dial the old Fire Department number, or they can go through the city's PBX system," Parker said, "but 911 will be a little faster. "And as you know, response is the name of the game."
The City Council additionally, voted to accept $70,000 offered Monday by the Ector County Commissioners Court to help offset the first year's cost of the ambulance service. It also appropriated $76,750 from the City's current general fund for that purpose. The City government's entry into the ambulance service business came when the private service provided by Baker Ambulance Service was discontinued. Baker earlier this month announced it would not seek a renewal of its franchise for emergency service because of problems with rising cost and problems with collections from the users. Baker ended its commitment to the City, Monday, but agreed to provide an extra 12 hours of service until the council's final approval Tuesday.           The three temporary emergency vehicles to be operated by the firefighters are leased from Modular Ambulance Corp. of Dallas. The City expects to have its own permanent vehicles ready for use in December.

The City Manager Ron Neighbors emphasized that the phone number 911 "is certainly an important number for all of us to remember and to teach to our children.

" Mayor Jim Reese, who noted that Odessa was the first City in Texas to get the emergency number 911, warned, "If it is not an emergency, don't call 911."

In fact, the council tacked on a second ordinance which makes it a crime to knowingly turn in a false alarm to that number. The same ordinance prohibits the operation of an emergency ambulance in the city without a franchise, and it forbids the use of emergency lights and siren by a non-emergency vehicle unless it is bringing in a patient in an emergency case from another town. Violators of this ordinance would be subject, upon conviction, of a fine not to exceed $200.

In response to a question by Councilman Tommy Salmon, Assistant City Manager Ron Harmon said the city would do it's own billing for the ambulance service. "Were working out a cooperative method with the hospital so we can bill out of our operation," Harmon said. It has been erroneously reported Monday that the billing would be done by Ector County since the patients will be taken to the county's hospital.

While Councilman Dick Clark noted that there will be a year to year cost to the city of something like $25,000, Mayor Reese replied that the cost would be even higher if the Firefighters hadn't volunteered to provide the service.

Councilman Willie Hammond said he wished to commend the County government for its financial aid and its cooperation in establishing the ambulance service. Deputy Chief Parker said the departments ambulance personnel was in new uniforms and ready to go at noon Tuesday.


Those who were prepared to take the first shift in the emergency vehicles Tuesday were; 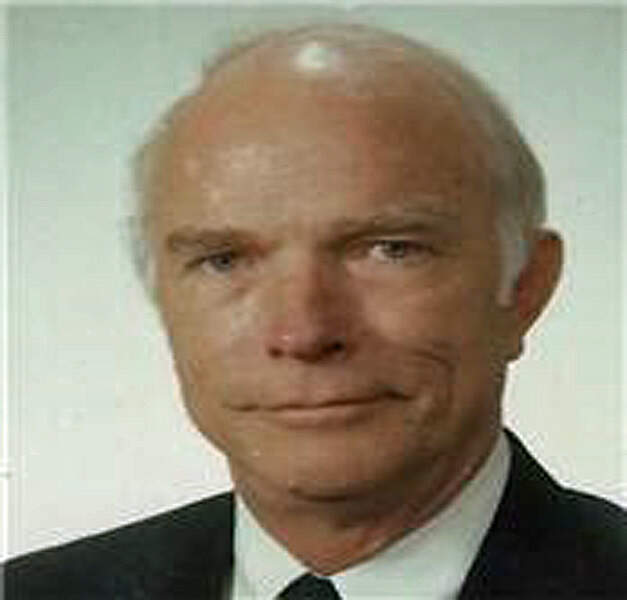 Dr. Nathan Galloway was OFD's 1st Medical Director and had a major role in promoting the 911 emergency service in Odessa as well as the ambulance service. He was the driving organizational force behind the training program for the Odessa Fire Department's Emergency Medical Technician Program. He contributed his time, knowledge, abilities and efforts as well as persuaded and coordinated other doctors and professional people to establish the program. This lifesaving and emergency care program produced a highly qualified and capable group who render emergency aid. This outstanding service has saved countless lives in the region.

Renting 3 Temporary Ambulances To Get Started 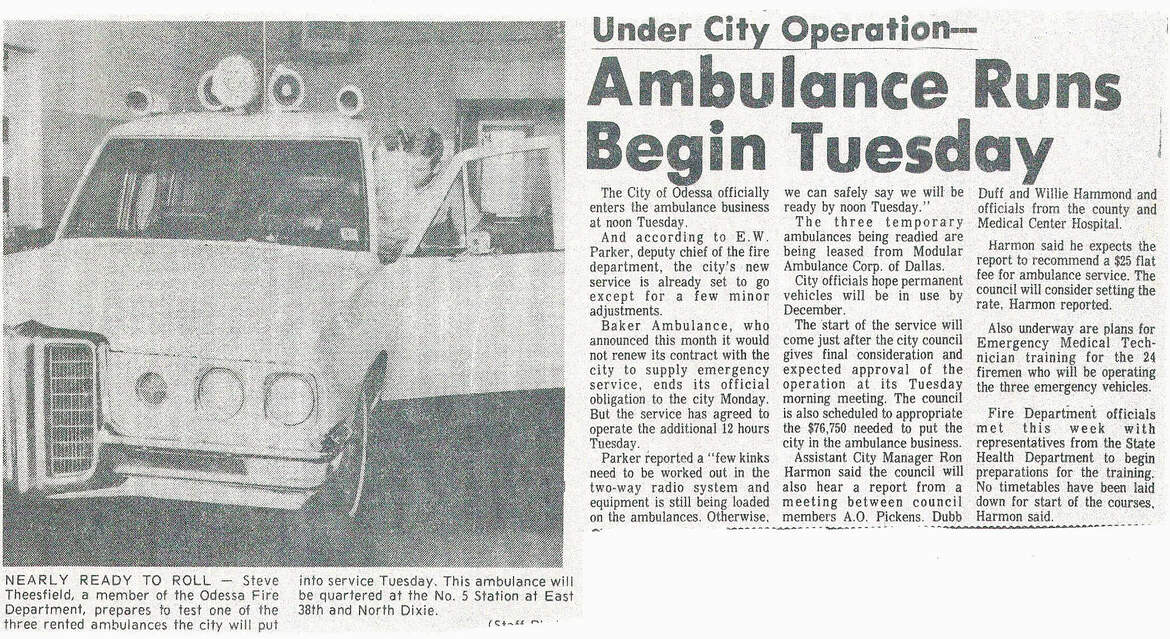 For Firefighter/EMT's Justin Dewbre & Clarence Mayo, The first alarm sounded on July 24th, 1973 at 1:11 p.m.
for an industrial accident victim. 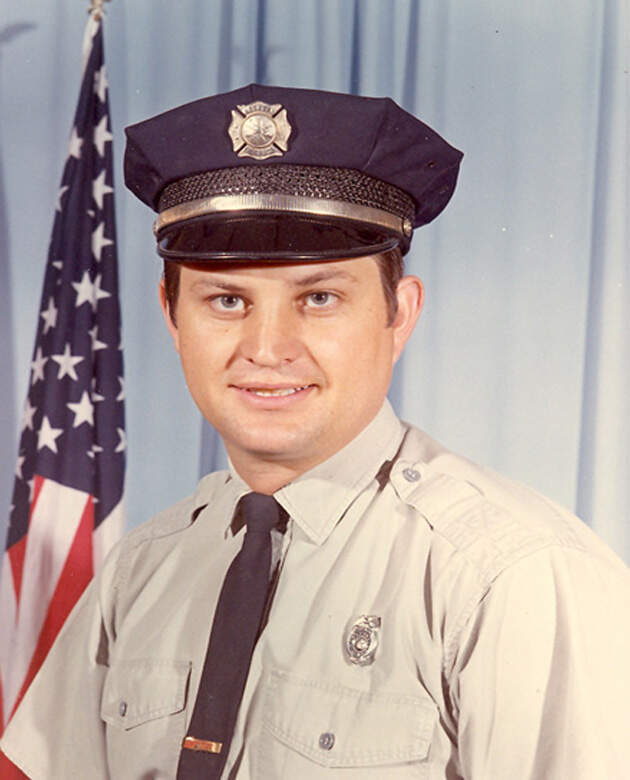 Justin Dewbre continued his Emergency Medical Training and graduated from the 1st Paramedic Class in Odessa in June 1975. Justin later promoted to Captain & later retired from the Odessa Fire Department June 30, 1996 with over 28 years of service 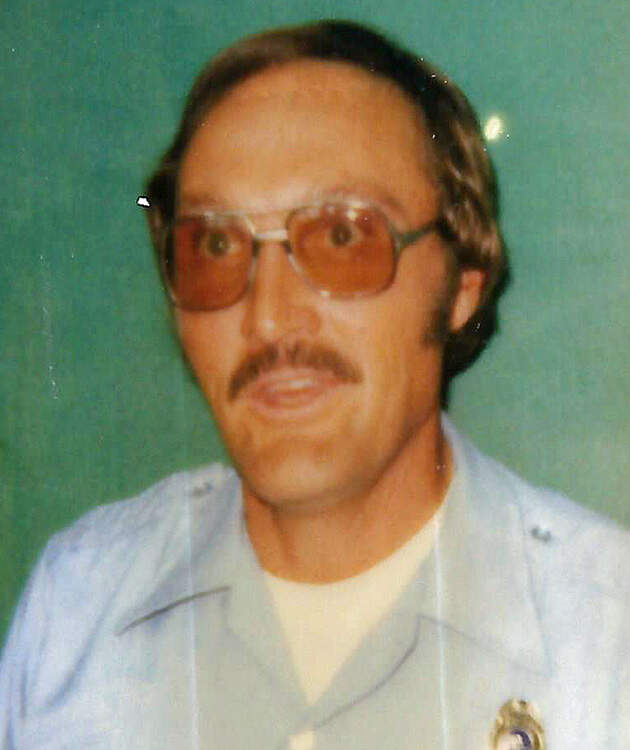 Clarence Mayo continued his Emergency Medical Training and graduated from the 1st Paramedic Class in Odessa in June 1975. Clarence later promoted to Captain & later retired from the Odessa Fire Department November 15, 1996 with over 27 years of service. 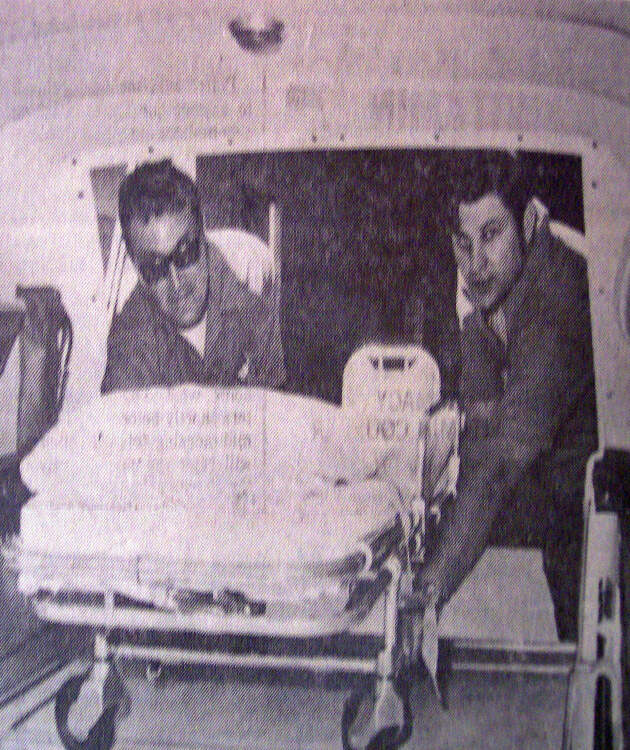 The two firefighters, who volunteered for the ambulance duty, said the first day was "hectic." Dewbre commented "I don't think there is any way we can be organized until we've had a few runs. Mayo added, "It's about like we expected it would be. I guess I was scared when the first alarm sounded, just like I was scared the first time I got on a fire truck.

Becoming ambulance drivers was not as traumatic as Justin Dewbre and Clarence Mayo had expected. "I didn't get as upset at the sight of blood as I thought I would," Mayo reported. And Dewbre added, "I was scared but no more than I had expected." The two ambulance attendants were the first to answer a call after the City of Odessa's new emergency Ambulance Service went into operation at noon Tuesday. Headquartered at Fire Station # 5 at 38th & Dixie, the two said their first runs "were the kind you dread and hope will come after you've had a little experience."
The first alarm sounded on July 24th, 1973 at 1:11 p.m. for an industrial accident victim. "The guy had a head injury and was in shock. He didn't want to be taken to the hospital," Dewbre reported. "It took us nine minutes to go the seven miles to the construction site at 81st and West County Road," the driver said.
The second call was a false traffic accident alarm. The third run was at 2:23 p.m. when it took the crew three minutes to arrive on the scene of a car-truck traffic accident at Kermit Hwy and West County Road. "We had to administer first aid to an elderly lady in that one," Dewbre reported. A man was also injured in the mishap.
The two firefighters, who volunteered for the ambulance duty, said the first day was "hectic." Dewbre commented "I don't think there is any way we can be organized until we've had a few runs. Mayo added, "It's about like we expected it would be. I guess I was scared when the first alarm sounded, just like I was scared the first time I got on a fire truck. The emergency workers explained that calls come through the Fire Department's  Central Dispatcher. The dispatcher notifies the fire station and the alarm sounds. Fire Station # 5 is equipped with a buzzer, a loud alarm and small bells throughout the building. As the alarm sounds, the dispatcher relays information over the phone. A loud speaker system in the station picks up the dispatchers voice as he gives the location and nature of the emergency.
Dewbre said he can plot out the quickest route to the site as he gets into the ambulance. The drivers proudly displayed their 1970 Pontiac Ambulance. Dewbre pointed out that the ambulance attendants are serving double duty since they are on fire call at the same time they are working the ambulance shift.
The entire ambulance operation answered 11 calls during its first day. Seven came out of Fire Station # 5 and four out of the Central Fire Station. Dewbre & Mayo were not vociferous about their reasons for volunteering for ambulance duty. "I just thought I'd like it," Mayo said. And Dewbre agreed. And Dewbre added, "I'll probably still have butterflies a year from now when I do a call. If I don't, Ill start worrying,"

The first EMT Class was taught by local Medical Doctors and some classes were videotaped with 1/2 inch Helical Scan Video reels. I sent them to CinePost in Georgia to be transferred to digital Mp4 format to preserve the video for viewing. They are available here for you to watch. 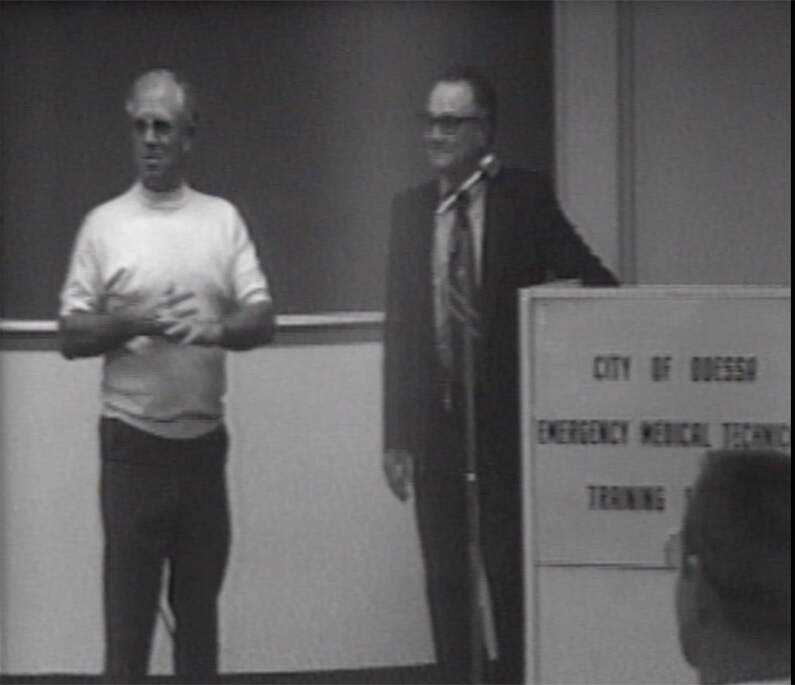 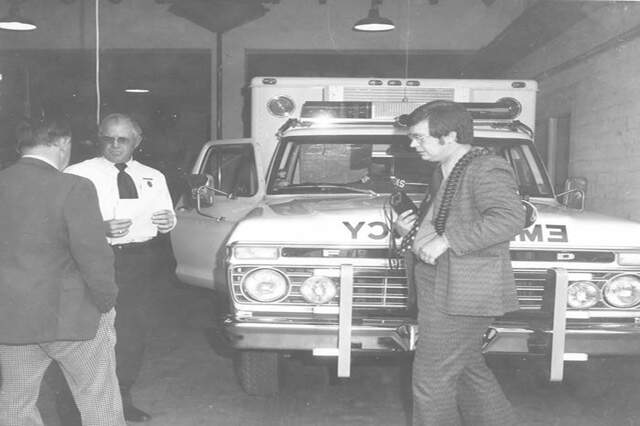 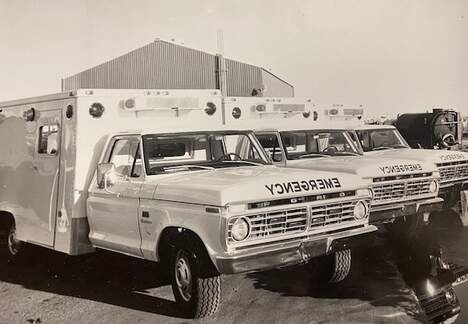 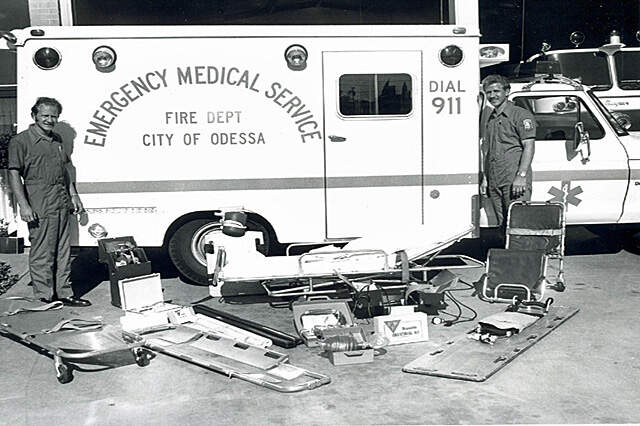 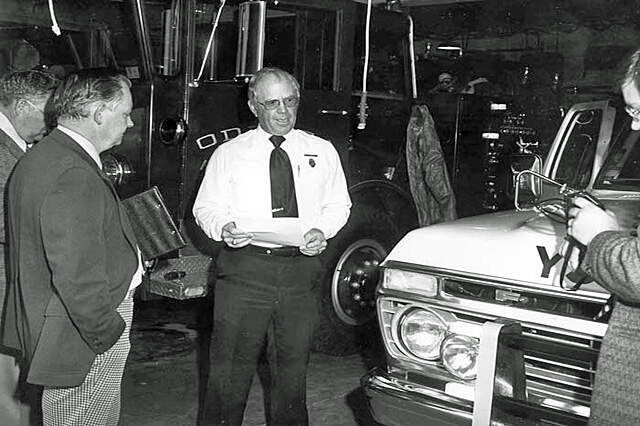 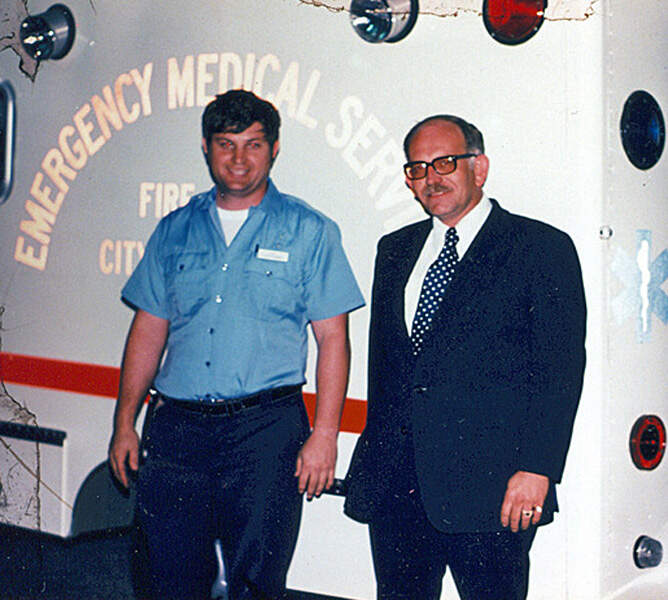 ​Dr. Robert Rowntree became OFD's 2nd Medical Director. Dr. Rowntree was involved from the beginning along with many other local doctors in the medical training Odessa Firefighters in their Basic EMT & Advance Paramedic skills.

Once these units arrived the Odessa Firefighters were trained to send EKG's to Medical Center Hospital and talk with Doctors & Nurses in the Emergency Room. 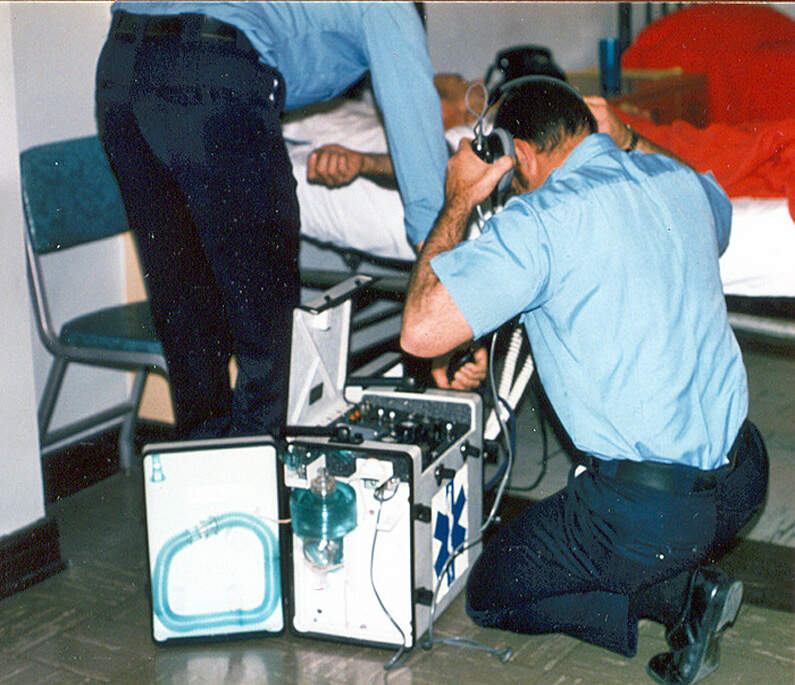 Once these units arrived the Odessa Firefighters were able to have complete communications with Medical Center Hospital Emergency Room Doctors & Nurses. Even with the firefighters miles away the Doctors could view & print the EKG's in real time. 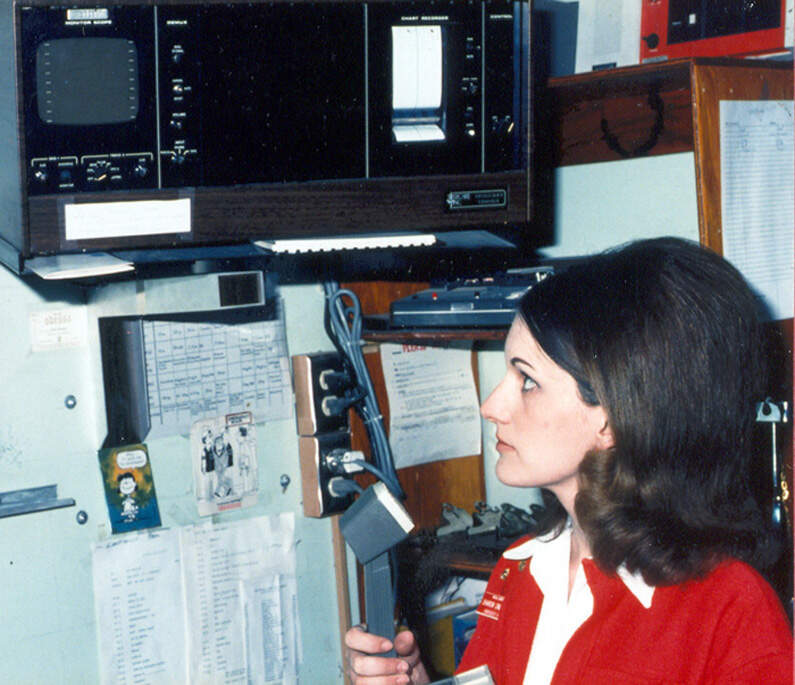 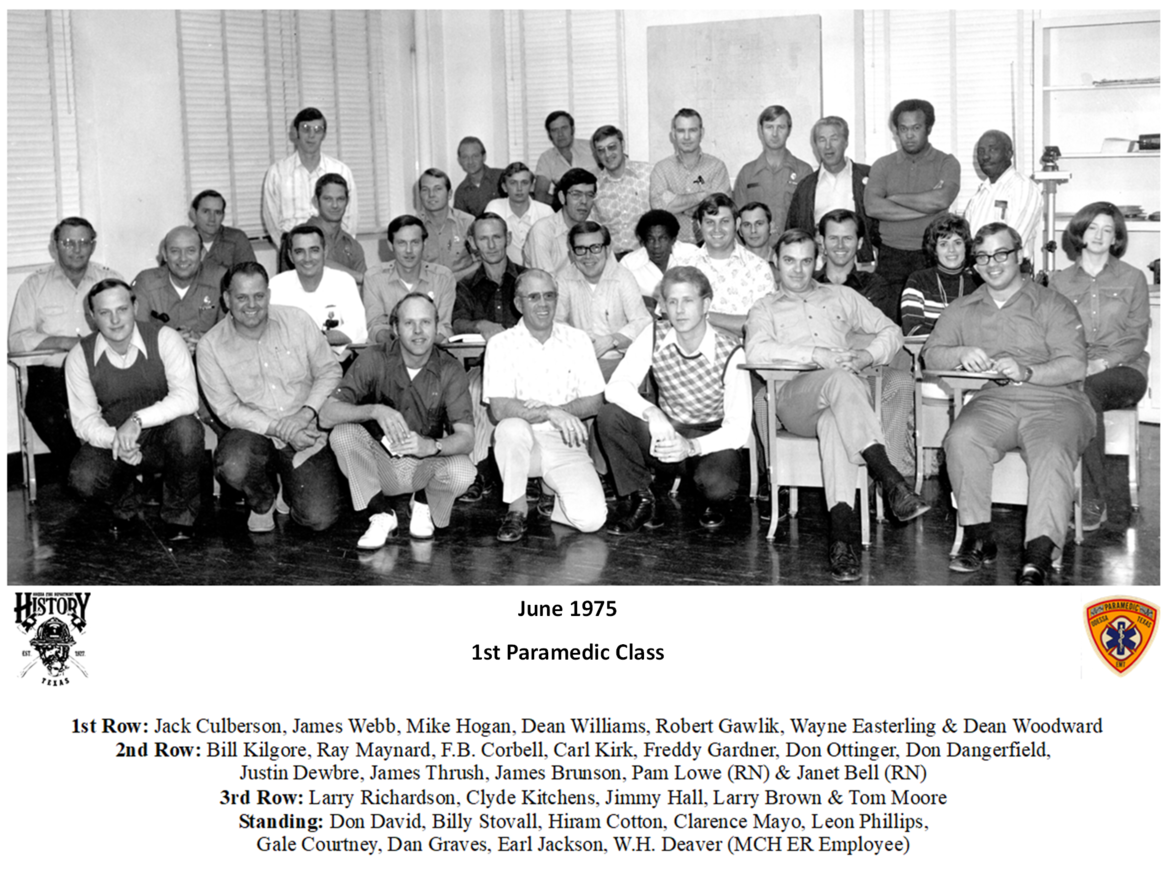 The Odessa Fire Department started it's 1st Paramedic Class with 24 Firefighters and 7 Civilians in January 1975 and finished the class in June 1975. The Paramedic class instructors were local doctors that volunteered their time and expertise in their perspective fields.

Odessa was second behind Houston in having highly trained paramedics and the State of Texas was still trying to catch up with the growing need for paramedics and did not have a State Paramedic Certification system in place yet, much less a State Certified Paramedic Patch for use on a uniform. Odessa created it's own Paramedic Patch. 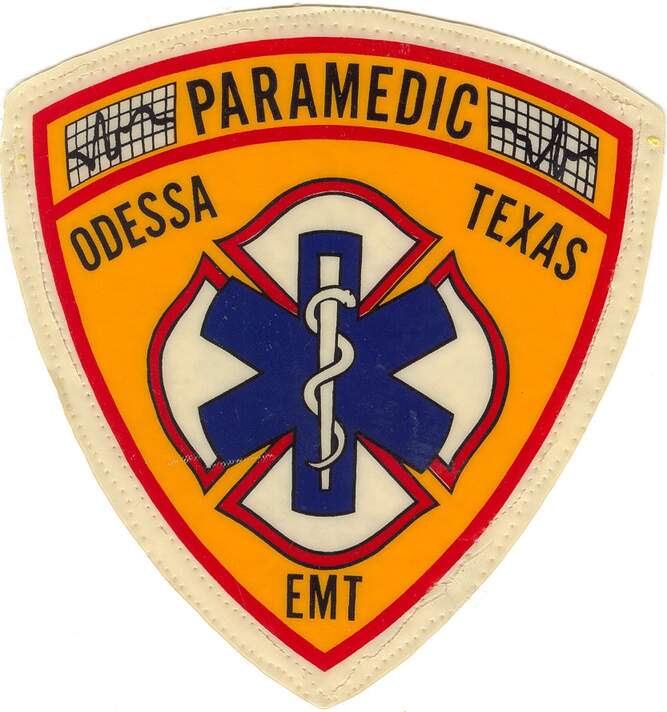 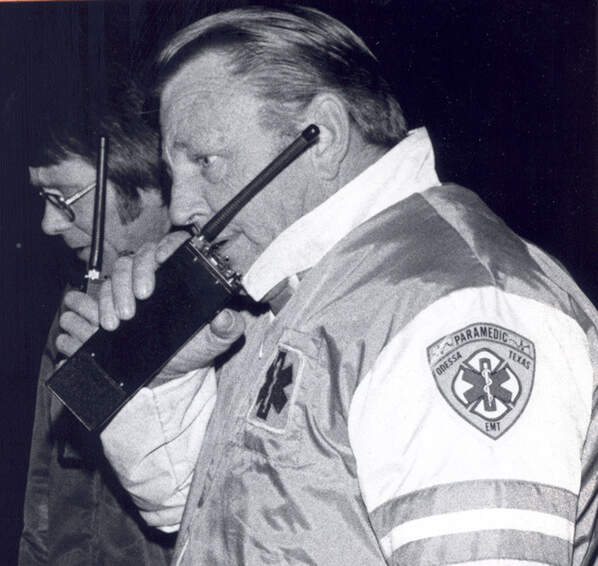 PHOTO: In the foreground is EMS Chief Bill Kilgore & behind him is Dow Hestand who was responsible for the Fire, EMS & Police Communications.

In 1996 under the direction of Fire Chief John Brown and Assistant Chief Charlie Smith the Odessa Fire Department made changes in how the EMS would operate. After careful analysis of our department, they determined we could eliminate three (3) specialized vehicles, consisting of two (2) rescue vehicles and one (1) ladder truck. The rescue vehicles could be deleted from our fleet by simply placing the rescue equipment on a fire engine, allowing that fire truck to serve double duty. The ladder truck could be deleted by replacing an older, existing engine with a fire engine equipped with a ladder, such an engine is called a Quint. Combining the capabilities of these units allowed us to move personnel formerly used to staff this equipment to our eight (8) fire engines, which gave us a total of four (4) personnel per engine, which is certainly the safest and most efficient number of people to better deliver fire suppression to our community.

We were fortunate enough to have enough certified Paramedics to place at least one on each engine as well as the funds saved from deleting the rescue and ladder trucks, to stock and equip our eight (8) fire engines with the same supplies and equipment used on our M.I.C.U. ambulances.

Chief Brown made it mandatory for all personnel to be medically certified to at least the Emergency Care Attendant (E.C.A.) level, progressing our department from approximately 50% certified personnel to 100%. With the eight (8) fire engines staffed with at least one Paramedic and three (3) E.C.A.'s equipped with the same medical equipment and supplies as a M.I.C.U. ambulance, we increased our medical coverage to our community by 50%. This began the "Paramedic Engine" era of the Odessa Fire Department.

The Fire Department switched from the original six (6) lead EKG monitors to twelve (12) lead which will give the Emergency Department Physicians an opportunity to diagnosis of Cardiac problems much quicker with a more detailed EKG, which can be transmitted from the ambulance to the emergency room prior to transporting the patient.