The “Odessa Fighters Association Ladies Auxiliary” formed on December 7th, 1966 and had as its purpose, community service and a civic-charitable program. The 75 member group made it one of the largest in the State in the 1960’s.

Their activities included assisting families suffering loss by fire, Toys for Tots program, March of Dimes, Head Start, Muscular Dystrophy, Voters registration, Project Monoxide, and issues for community betterment. During time of need, the Sparketts would assist firefighter families and work with our husbands who were members of the Odessa Firefighters Association with their projects.

Two representatives from the local Odessa firefighters association, 2nd Vice President Truman Sellers and Treasurer Wayne Dye, met with sixty-two wives and daughters of the Odessa Firefighters Association on December 7th, 1966 to help organize our ladies auxiliary. Temporary officers were elected to serve until our state and international auxiliary charters were received. The officers installed were President Mrs. F. B. Corbell and Secretary-Treasurer Mrs. Truman Sellers.

A special meeting was held on December 13th, for the official signing of the applications for our State and International Charters. Seventy-five ladies signed the application. 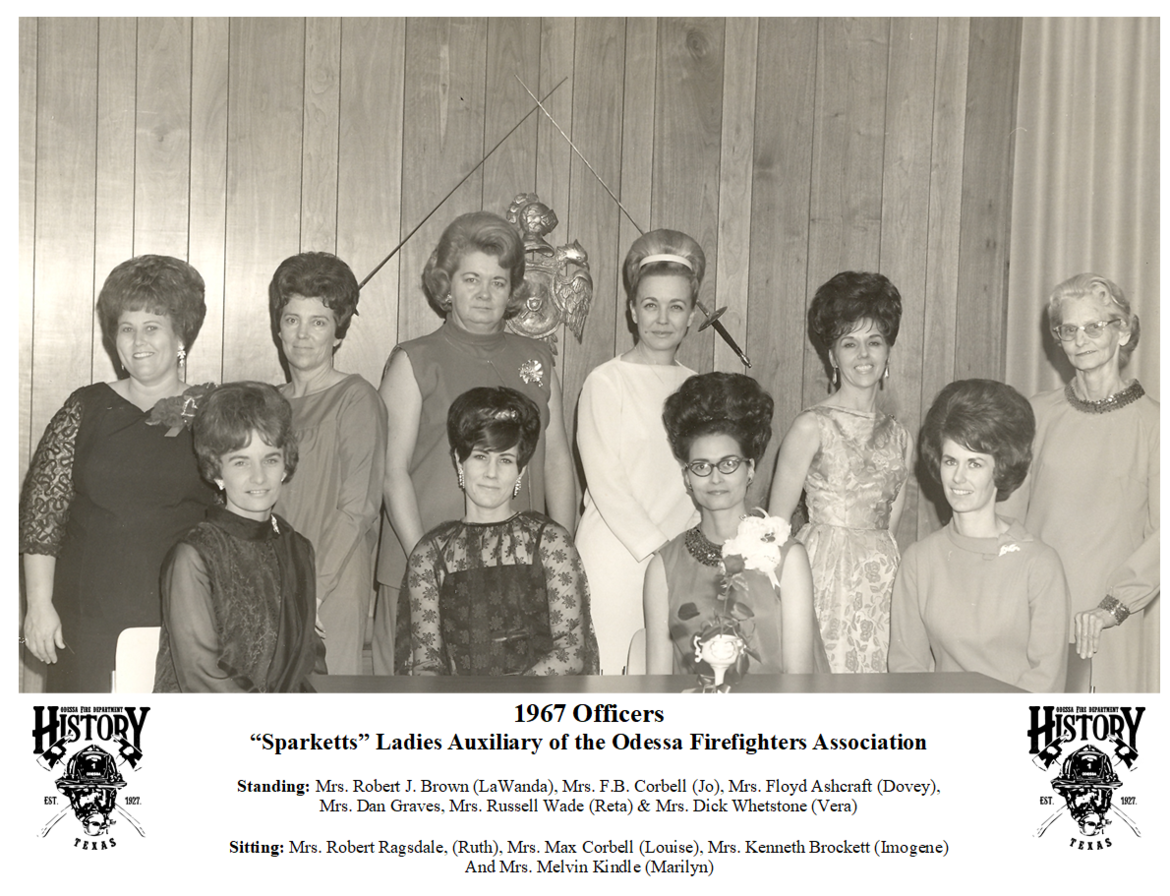 In January of 1967, we assisted our husbands of the Odessa Firefighters Association in circulating a petition to city residents requesting a pay raise that would equal the salary of the Odessa Policemen. Through their combined efforts, they obtained over eleven-thousand (11,000) signatures, by far than sufficient to call a special city election. The Sparketts also participated in the 1967 Voters Registration Drive by distributing the registration blanks and returning the completed application forms to the Ector County Courthouse.

In February of 1967, the Sparketts Auxiliary Charters were received and read during the monthly meeting and their local constitution and by-laws were presented and adopted by members. Election of new officers for 1967 was held and plans were made for the March visit of the State President to install the officers.

In March of 1967, Officers for the Odessa Firefighters Ladies Auxiliary were installed with an elaborate ceremony at St. John’s Episcopal Church fellowship hall. President of the State organization and Vice President of the International Firefighters Ladies Auxiliary Mrs. Margaret Walter of San Antonio was the installing officer. Mrs. Dan Graves was in charge of the meeting. Mrs. Robert J. Brown Jr. (LaWanda Brown) was the chaplain and read Colossians 3:17 as the devotional Service.

The red rose was the installation theme for Mrs. Walter, who received a peppermint carnation corsage from the Odessa Auxiliary. Presenting each new officer a long-stemmed red rose, she used parts of the flower to designate qualities of each office. President Mrs. Graves represented the plant’s root, the strength of the organization. First Vice-President Mrs. Kenneth Brockett was said to be the stem, supporting the group; Second-Vice President Mrs. Max Corbell was designated as
the rose’s petal, representing her many duties as head of all committees.

Corresponding Secretary Mrs. J. C. Decker stands for the red blush of the rose, denoting the “Red Letter Day” of sending and receiving correspondence. The plant’s leaves signified the office of recording secretary, held by Mrs. Melvin Kindle, who must “turn the leaves of the meeting minutes.”  Mrs. Russell Wade, Treasurer, was represented by the flower’s greenery, denoting money in her keeping. Parliamentarian/Historian Mrs. Dick Whetstone stands for the fragrance, showing her presentation of the club’s history and procedure. The thorns, depicting the office of Sergeant-at-Arms, held by Mrs. E. D. Leverton, warn of the unpleasant task of keeping order at meeting.

Chaplain, Mrs. Robert J. Brown Jr. (LaWanda Brown) was given the care of the rose, symbolizing her nurturing of the organization, spreading the sunshine of devotion. Mrs. Floyd Ashcraft, trustee of internal affairs, and Mrs. Robert Ragsdale, external affairs trustee, are represented by the “Use of the Rose”, meaning their duties being put to use by officers and members.

Gifts of appreciation from the members were received by the two out-going officers, President Mrs. F. B. Corbell and Secretary/Treasurer Mrs. Truman Sellers.

Our most outstanding project in the community was our aid and assistance given to fire victims. Since we organized in December of 1966 we have helped five (5) families whose homes were destroyed by fire. We supplied them with clothing, money, food and canned goods, linens, dishes, furniture, temporary shelters and performed other services deemed necessary. Our current money making project is selling Vivian Woodard lipsticks.

The firefighter’s pay raise election was to go to the polls April 4th, and F. B. Corbell, President of our Local firefighters association, met with the auxiliary members on March 14th to secure our help and cooperation in the election campaign. We gave our utmost support to this drive by visiting and calling our friends who are registered voters, enlisting their votes, support and backing. We volunteered free baby-sitting and rides to the polls. We put hundreds of “Support Your Fire Fighter” auto bumper stickers, distributed leaflets for the candidates of the city council race, that are endorsed by our firefighters, and numerous other services requested by our husbands and firefighters 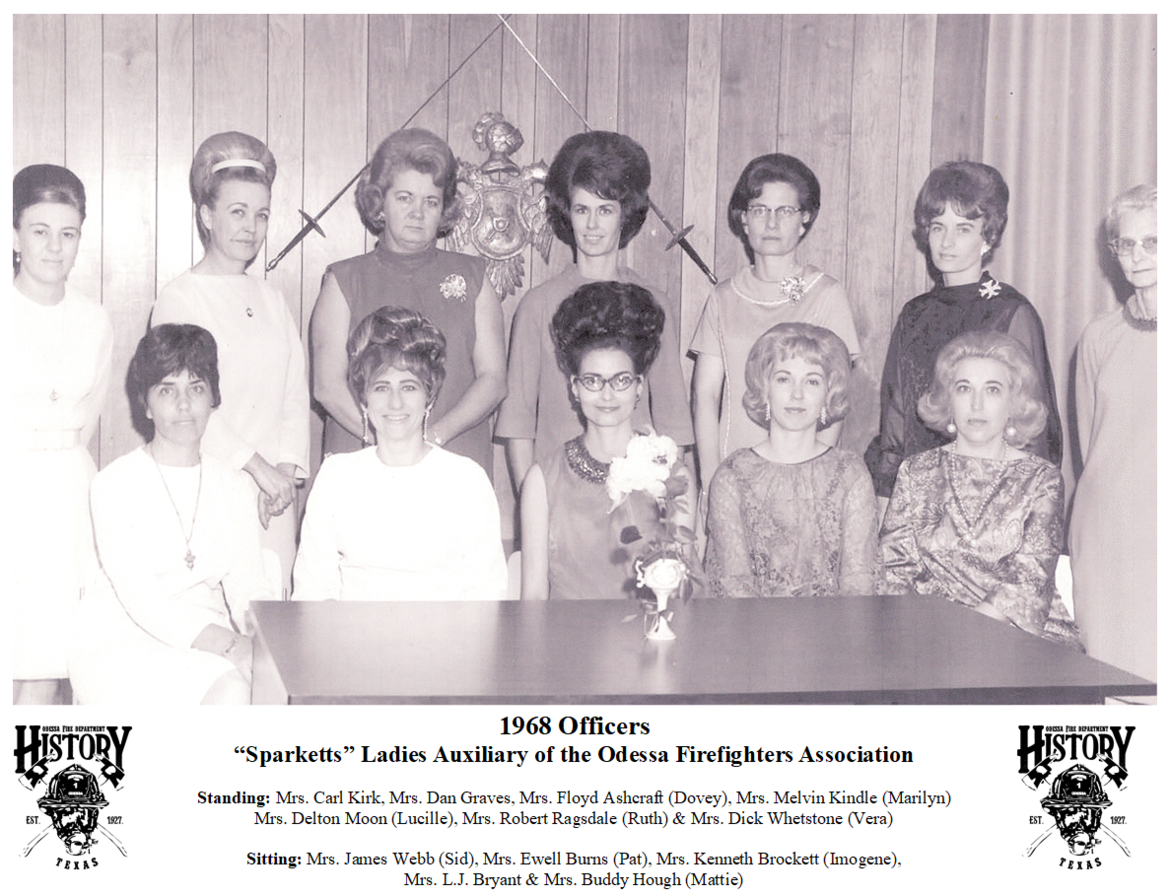 A “Sweetheart Banquet” was held before the installation of officers. Each table was decorated with milk glass vases and red roses. The place cards were red felt hearts, trimmed with white lace. Mrs. James Webb and Mrs. Dick Whetstone served as “Sweethearts for 1967” and each was presented a heart-shaped pendant for outstanding service in Auxiliary work.

Our auxiliary has progressed since we organized in December of 1966. We actively participated in the “March of Dimes” and “Muscular Dystrophy” drives. We boxed and sent clothing and household items to the flood victims after Hurricane Beulah. We have several women active in the “Head Start Program”. The serve as volunteer workers to assist the teachers. We have donated ready-to-wear clothing, shoes, and toiletries. During Christmas, a tree and decorations were presented to Head Start, and 48 dolls were dressed for the Salvation Army. We have assisted, in various ways, 18 families whose homes were destroyed or damaged by fire.

The auxiliary invited the candidates for mayor and judge of the 161st District to speak to the members and their husbands. The candidates for city councilman and Ector County school board also spoke.