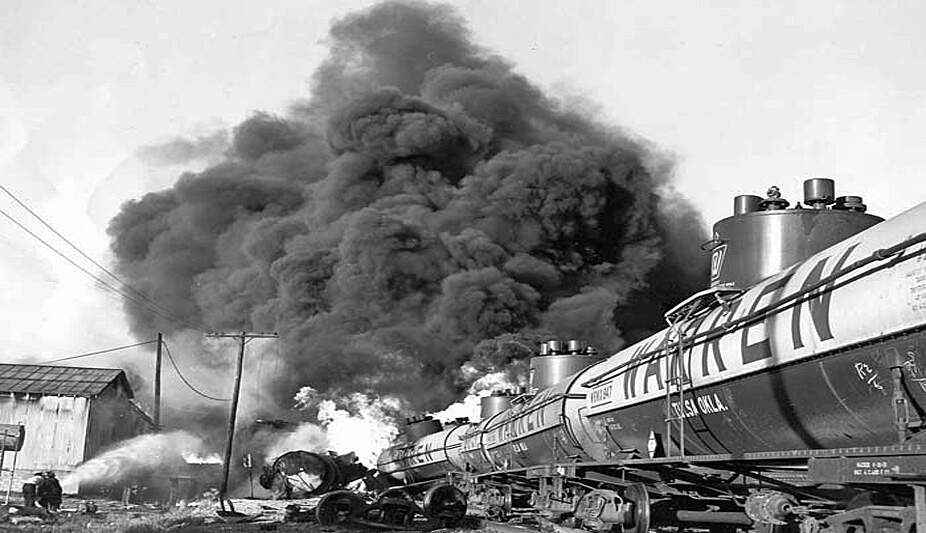 A screaming snake of eight runaway railroad tank cars loaded with highly explosive natural gasoline raced over a 10 mile stretch of track to hurdle into a standing switch engine and explode into a blazing inferno amidst the West Odessa warehouse district.

The fiery blast which resulted in the burning of two warehouses and grotesque twisting of steel derailed tank cars led to loss speculation which varied from a quarter of a million dollar to a million dollars in damage. Almost miraculously no lives were lost and no one was believed seriously injured in the freak accident which blazed for an estimated eight hours. Caught in the flames were the Jack Rainosek Sales Company, wholesale oil and grease, 101 N. Belmont and City Transfer & Storage, 102 N. Belmont.

Firefighters operating courageously in the face of possible explosions from the high-octane gasoline tanks, battled the blaze an estimated 8 hours. They used every facility and man available and called upon an additional pumper from Midland Fire Department.

The chain of events leading up to the costly fire started at the Shell Oil Co. Penwell loading rack at Douro, located about 10 miles west of Odessa. According to Clyde Gray, superintendent of the gasoline plant, the eight cars had been loaded with gasoline at the Shell loading rack Wednesday evening and were left by plant employees on a "Spur" for shipment to Warren Petroleum Corporation. The shipment had already been "billed", he added.

He said the gasoline, called casinghead gasoline, has 26-pound vapor pressure and was a natural liquid. The gasoline is valued at five cents a gallon wholesale. Another employee, Buddy Ryles, a loading rackman, said that when the crew left work Wednesday evening the eight cars were inside the "frogs", safety devices to keep cars from rolling off. The "frogs" must be released by manpower before they can be taken to the main line of the Texas and Pacific railroad, he said.

It was believed the cars were moved by switch engine shortly after 6 pm to the main line in preparation for hooking them onto a locomotive and then unhooked from the engine. The cars moved off on the downgrade track about 6:15 pm picking up speed estimated by startled witnesses at 75 miles an hour at their peak.
Employees of Stanolind Oil & Gas loading rack, located about four miles east of the Shell rack, spotted the runaway cars and according to reports, two employees got in a pickup truck in a desperate attempt to reach Odessa first and notify agents to clear the tracks. The men told officers the cars were going too fast for them to outrun. Another employee, U.E. Kampf, told Police Captain Johnnie Wise the cars were moving about 75 miles an hour when they passed the loading rack.
A phone call was reported placed to the T&P depot here but the cars limited time made it impossible to act in time. Witnesses to the collision of the delinquent cars and the switch engine and the engine crew, which had been moving empty cars, apparently heard the approaching rumble of the gasoline tankers and leaped to safety. Time of the actual impact was given at 6:23 pm. Four of the gasoline cars bucked immediately and a fifth was partially derailed. An empty boxcar was hurled from the tracks and burned.
Assistant Fire Chief Bill Edmiston said he believed none of the cars of gasoline exploded immediately, that they were ripped open by the impact and the flames caught the gasoline.
The fire rapidly spread to the Rainosek Sales Co. warehouse, which housed numerous items including thousands of dollars' worth of grease, oils, rope and other merchandise. The Sheetmetal building built on cement blocks, was considered a total loss. Owner E.P. Rainosek was not available for comment at noon today.
The other warehouse, the City Transfer & Storage building caught fire at a southwest wing was badly burned. Co. Manager John W. Brumlow said today the building housed numerous articles including air conditioners, fiber materials, water softener, chemicals, and many other items. He estimated a 75 percent loss in building and merchandise but said no dollar estimate on losses could be made immediately.
A truck owned by the Odessa Cartage Company and a pickup owned by the Rainosek company both parked between the warehouses, were not badly damaged. Brumlow said he and other employees managed to move several of their trucks out of danger.
Firefighters headed by Fire Chief Charlie Meadows, moved six pumpers and boosters to the scene. No chemicals were used but use of fire nozzles made it possible to encase the flames with water, shutting off oxygen. About 50 Odessa firefighters answered the alarm, along with eight Midland firefighters.
Three Halliburton Oil Cementing trucks aided in the firefighting by bringing in loads of water.
Three of the gasoline cars were moved from danger by wench trucks manned by volunteers who used cables to drag them to a safe distance. Firefighters kept a steady spray of water on the tanks to keep them from exploding. The tanks are equipped with relief valves which gasoline plant officials believe played an important role in keeping the tanks from exploding.
The flames played out about 3 am today, but firefighters stood by this morning to halt any new outbreak of fire and to aid in cleaning out tanks. The remainder of the fire crew were engaged in getting their equipment ready for service.