Since 1949, oil companies drilling wells have used hydraulic fracturing to get the oil products out of the ground. Fracturing is a process of injecting a sand and oil mixture under pressure into an oil deposit deep in the earth, thus separating crude oil from the heavier elements of the deposit, so that it may be pumped to the surface. The sand and oil are passed through a blender which is equipped with centrifugal pumps and a proportioner. This machine adds the desired amount of sand to each gallon of oil.

Blender pumps produce up to 70 barrels per minute and the danger of fire is greatly intensified when a hose bursts and "live" oil contacts on ignition source.

According to Chief Meadows, several fatalities and several millions of dollars worth of fire loss have resulted because of inadequate firefighting facilities and lack of training in oil fire fighting techniques.

To provide the proper training, the Fire Research and Development Center was developed by the Odessa Fire Department & Midland Fire Department in cooperation with a number of oil and gas producing companies. The training & Research was conducted at the training center in 1957 & 1958  during and intensive five-day program. Firefighters and service company personnel had opportunity to take part in practical combat of fires involving natural gas and flammable liquids under a variety of fire conditions. More than 1000 barrels of crude oil and thousands of dollars worth of equipment was donated for use during this oil firefighting research by oil producing and oil field service companies.

Transferred from 16mm to MP4

There were seven "problems," each of which was handled in a number of fire attack tests. Accurate measurements were made of the time required to control each fire.

As the fires varied in size and complexity, fire fighters learned the application and limitations of various fire fighting methods and facilities for various kinds of fire. They also learned how groups of fire fighters are organized in combating large scale oil fires as a team.

A description of each training problem is located below.

Problem #1      Featured a "Christmas Tree" into which natural gas is supplied through a 2 1/2 inch pipe under 100 to 160 pounds of pressure. The gas escapes through loose flanges and open ends and is allowed to "pre-burn" for approximately 45 seconds; then the trainees begin their fire attack. Altogether, six methods of extinguishment were used on this particular problem.

Problem #2      This circular pit, 75 feet in diameter, contained 9,000 gallons of crude oil with "no water cushion" Test fires were allowed to "pre-burn" for 60 seconds.

Problem #6      A typical "fracture" is created in an oval pit 60 feet in length and 45 feet in width. Usually six or seven old automobiles and a 100 barrel fracture oil tank is involved. A 2 inch pipe with 10 perforations runs through the cars at the center of the pit. A "rupture" is created, allowing 144 gpm to escape under 150 pounds pressure. The oil sprayed on the cars and the tank, with the pressure supplied by a pump truck located at a safe distance. Two types of test are conducted: stopping pressures from the pump truck as soon as the fire began, then allowed 30 seconds "pre-burn". In the second test, the oil is pumped continuously and a 60 second "pre-burn" was allowed.

Problem #7      This was a irregularly shaped ditch, approximately 66 feet in overall length. Fire was created with natural gas escaping from a 2 inch pipe under 160 pounds pressure. 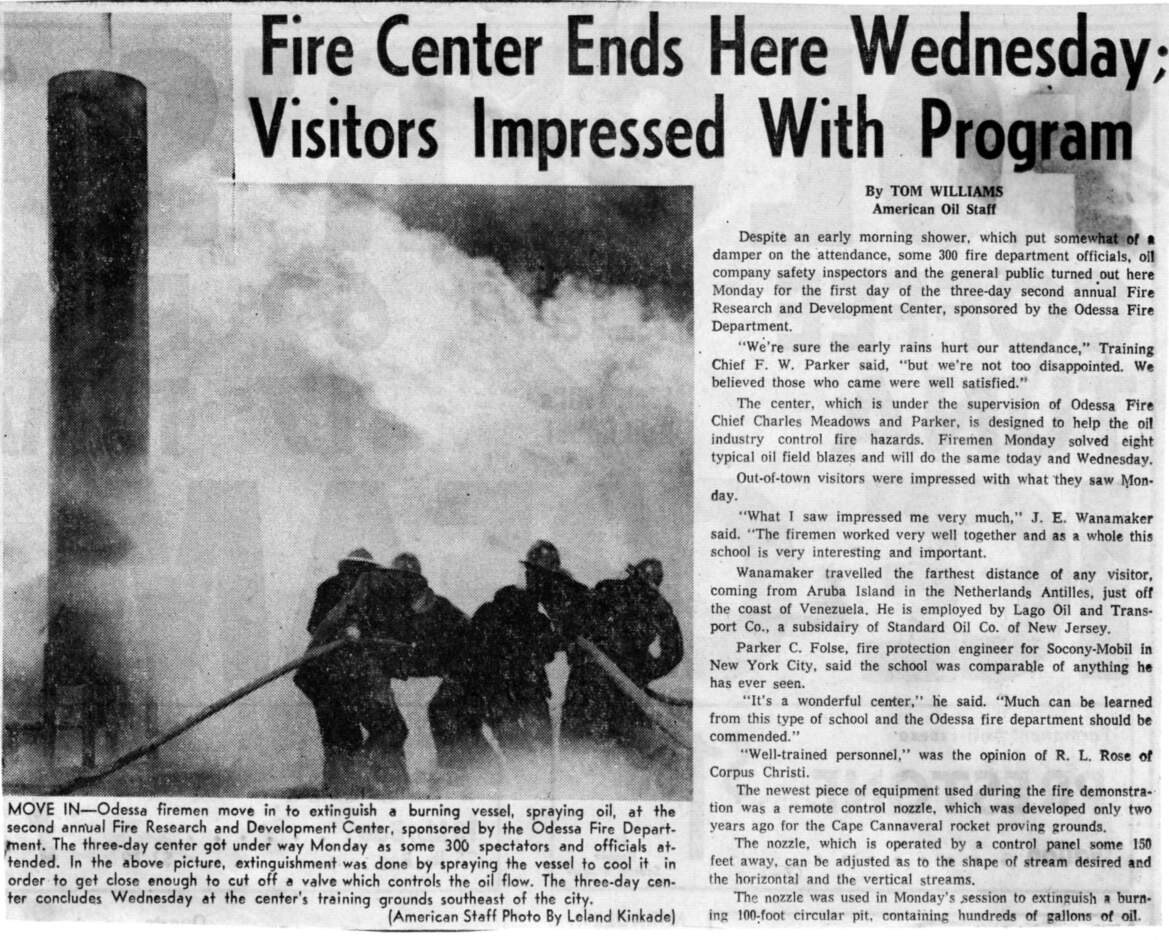