The OFFA’s charter is dated Wednesday, October 26, 1966. This may come as a surprise to some of you, but I was too young to be a fire fighter at this time so all my information for the OFFA’s history comes from retired fire fighters that were part of the original charter along with newspaper clippings provided by these former and retired firefighters.

To begin with I want to thank those brave fire fighters, our older brothers, who paved the road for us to continue what they started. You will discover as you read future chapters of this historical account, that these older brothers of ours had wives that were also a strong driving force in our unity from the beginning.

One of the first formal or informal meetings that took place in forming this association was on Monday night, October 24, 1966 at Floyd Gwin Park. You may ask why, why did we need to form an association? Or, you may even ask, why should we join or be part of a State & International association? Keep in mind that history tells us that some City of Odessa Leaders believe that it is easier to control city employees by keeping them divided and disorganized, such as police & fire fighters. The tactic of dividing the fire fighters themselves was well used in the 1980’s when the OFFA attempted to get Civil Service. The last thing the city leaders need is for Police Officers & Fire Fighters to be united in their beliefs and common goals. One popular way of achieving this goal of dividing the two is by paying one more than the other.

This meeting on Monday night came about because on September 27th, the city leaders voted to give the police a $68.00 dollar raise and not to give the fire fighters any raise at all. Our Fire Chief at this time was W .J. Bill Childress who wrote a letter to City Manager W. E. Routh, requesting that the fire fighters be given the same $68.00 dollar raise as the police officers.  (A Fire Chief speaking up for his men! Is that awesome or what? ) Of course the request was turned down. The fire fighters discovered that “United We Stand – Divided We Fall” had an important meaning for them if they were to get on equal footing with the police.

Representatives of the Texas Association of Fire Fighters, a group affiliated with the International Association of Fire Fighters and the AFL-CIO were at each of the meetings to answer questions and assist our older brothers with organizing the OFFA. “Lawyers, Doctors, telephone operators, Fire Chief’s, Police Chief’s and even City Managers all have professional organizations” reasoned Jack Bostick of Fort Worth, Vice President of the International Association of Fire Fighters. “Why shouldn’t  fire fighters.”?  Bostick himself a fire fighter, stated that the International claims local chapters in 1,600 cities ( Note: Remember, this is in 1966 ) in the United States and Canada “and none of them will ever strike or take part in a sympathetic strike.”  “It’s against our constitution and by-laws.” Bostick went on to tell the men “You want to sell your city officials on the idea  that you are skilled technicians just like the police,” he told the fire fighters, “we have never said the police shouldn’t receive the pay they do, but, we feel our skills are comparable with theirs. 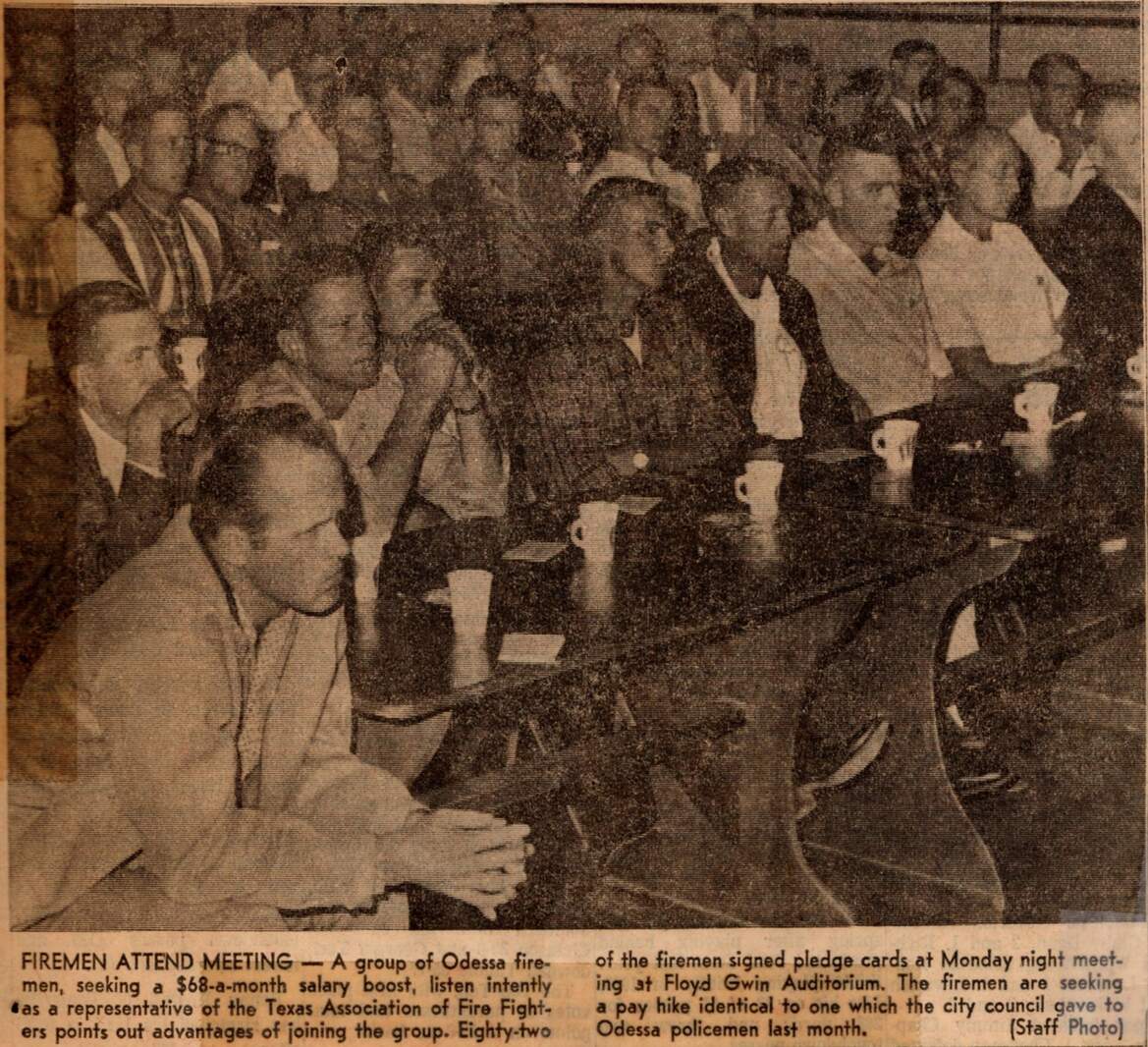 At this first meeting on Monday night 82 out of 127 fire fighters that were not on duty signed pledges, giving far more than the required 50% approval.

On that Monday night meeting the fire fighters selected their temporary officers. Captain Truman Sellers was named President and Forest B. Corbell was named Secretary/ Treasurer.

Action came after pledge cards were passed around and one fire fighter took the microphone to say; “ The best way to keep down our salaries is to keep us disorganized or simply ignore us. I’m signing up!” Each man laid out one dollar at the meeting to pay initiation fees.

The organizers recommended that the OFFA establish a system of dues based on one percent of a first class fire fighters monthly pay. This would figure to about $4.00 dollars a month, as a first class fire fighter was paid $405.00 dollars per month.  Of these $4.00 dollars, 65 cents would go to the Texas State Association of Fire Fighters and 65 cents would go to the International Association of Fire Fighters. The rest of the dues would go toward this OFFA to build its resources.

On Tuesday morning a second meeting was held for fighters that were on duty during the first session. Fire fighters were finalizing plans for charter application with the State & International Associations. During this second meeting thirty-six fire fighters attended and 36 of them signed pledges, bringing the total to 118 members of the OFFA out of a possible 127. This was an overwhelming victory of solidarity.