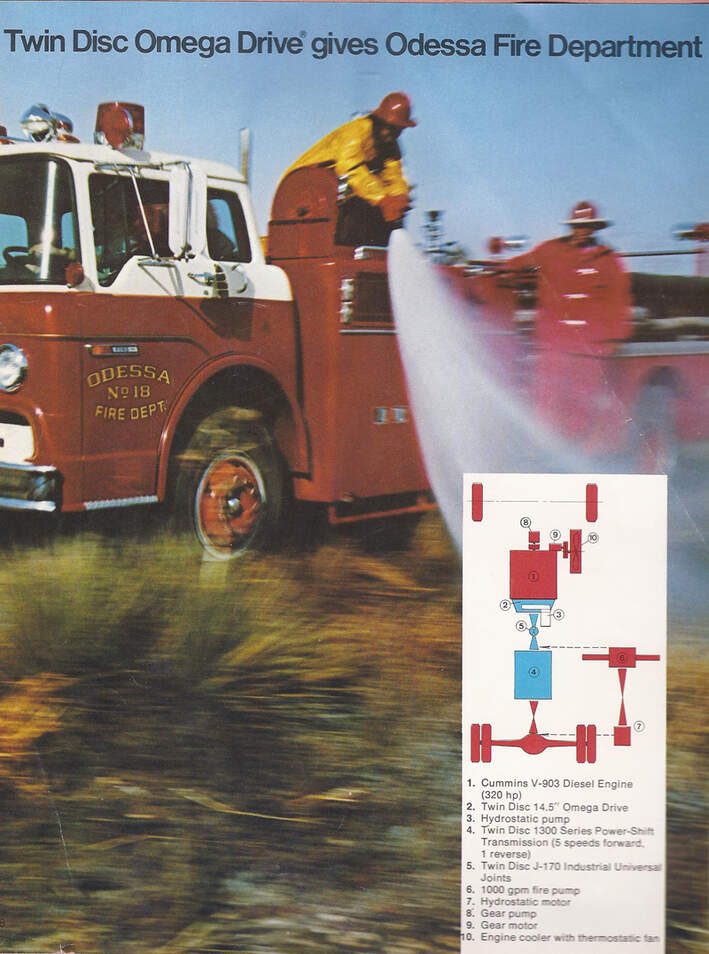 In a normal fire situation a firefighting unit battles the fire from a stationary position. However, in unusual situations like off highway brush and grass fires, you need the ability to move the fire truck and operate the pumps at the same time. The Odessa Fire Department wanted pump & run capabilities and it found the solution to it's problem right in Odessa. The solution was its 31,420 Unit #18 custom designed and built by Oil Industries Manufacturing and Engineering, Inc. Also known as OIME.

Unit #18 was powered by a Cummins V-903 diesel engine. Rated at 320 hp, the V-903 can drive the pumper at speeds up to 70 mph through a Twin Disc Omega Drive and Twin Disc 5-speed forward, 1-speed reverse 1300 Series Power Shift Transmission. The pumper was rated at 1,000 gpm at 150 psi, but it has been successfully tested at 1200 gpm. The pumper has a 500 gallon water tank and is equipped with three intakes of 2 & 1/2 inches in diameter and three intakes that are 6 inches across. About 90% of the department's fires can be handled through the units two 150 ft. one inch booster lines, and the unit can take on any house fire with the two 150 ft. 1 &1/2 inch hose lines. To provide on site lighting, the unit is equipped with a 2500 watt power plant.

According to Odessa Fire Chief Bill Childress, "This pumper is custom built to allow operation of fire pump while the vehicle is in motion. This pump & run capability is what we really needed for the engine's primary use... fighting off highway brush fires. With this unit we are able to pump in any volume we want and move as fast as necessary at the same time. Plus, this pumper has excellent performance in the same situation we usually find around Odessa.

As of August 1972, this unit had answered 451 emergency runs which included grass, cars, oilfield, residential and commercial fires with trouble free operation and a minimum amount of maintenance. Ed Phillips, President of OIME selected the Twin Disc Omega Drive and Power Shift Transmission to give the Odessa Fire Department the pump & run capability it needed. The Twin Disc Omega Drive is a combination hydraulic torque converter and modulated clutch that provides a new concept in variable speed control for propulsion and accessory drive. An outstanding feature of this power divider is its ability to divert up to 100 % of engine power from one drive to another in an infinitely variable manner.

As many as four engine driven PTO openings capable of handling up to 100 %  of net engine power are offered. The Omega Drive was a natural selection for the Odessa Fire Department's pump & run requirement because the Omega Drive provides infinite speed control for one machine function and constant speed for another.

For the Odessa fire unit, OIME selected the Twin Disc Omega Drive with 14.5 " Single Stage Hydraulic Torque Converter with Type 8 circuit. The torque converter was equipped with three output arrangements. Two of the three operate at engine speed while the third is through the torque converter and modulated clutch. One output drives a hydraulic pump to furnish the necessary oil for operation of both the Omega Drive and the Twin Disc Power Shift Transmission. This pump is gear driven through constant mesh from the engine flywheel.

The second is used to power a variable volume hydraulic pump. This pump furnishes oil the hydrostatic drive to turn the fire pump. The third output operates off the integral modulated clutch and hydraulic torque converter to drive the transmission. The oil supply to the clutch section of the Omega Drive is modulated (varies from 0 full pressure) so that clutch engagement can be varied from 0 to 100 %, thus producing an output speed from the torque converter to the transmission varying from 0 to full speed. The flow of oil to the Omega clutch section is controlled by applying an air signal of 30 to 120 psi to the modulating control valve.

The oil activated clutch in the Omega unit drives the engine mounted Twin Disc Single Stage Torque Converter. The output of the Torque Converter is direct connected through a Twin Disc Model J-170 Industrial Double Universal Joint Assembly to the Twin Disc 5 speed Power Shift Transmission. A parking brake is mounted on the output shaft of the transmission and is actuated by a lever in the cab. Gear ratios for the Twin Disc Transmission are 4.54:1 in 1st gear and reverse; 2.84:1 in 2nd; 1.82:1 in 3rd; 1.12:1 in 4th and.715:1 overdrive in 5th. The transmission is connected to the vehicle axle by a second drive shaft.